From the originally spacious apartment at 12 Klatovská Street, which belonged to the Vogl family, only the dining room and living room have been preserved. The adaptation of the apartment, based on the design by Adolf Loos, was made in 1928 for the paediatrician Dr Josef Vogl and his wife Štěpánka, who was the daughter of the house owner. The interior was created in the apartment of one of Loos’ previous designs from 1908. At that time, Loos had designed the space for the family of entrepreneur Otto Beck. Otto Beck later moved, together with the furniture designed by Loos, to the Müller’s house at 2 Náměstí Míru. Twenty years later, Adolf Loos redesigned this same interior for the family of Dr Vogl. This time, however, he included a doctor’s office with a waiting room and an X-ray workplace. Unfortunately, the medical section of the apartment was destroyed, together with the bedroom and children’s room, which were located in the private areas of the apartment.

The preserved lounge still boasts its decoration by means of a cherry wood veneer, with built-in frames for Japanese wood-engravings, and the adjoining strip of dark green wallpaper. In the axis of the front section of the living room, Loos created a distinctive feature typical of his designs – a fireplace made of red bricks, with a mirror wall placed above it, the whole of which was then lined by half columns of shell-covered marble. The dining room offers a view of the yellow travertine walls and yet another mirror wall, which is positioned just above the buffet counter. The Vogls fled in exile to escape the Nazis. After the war, they were forced to flee from Pilsen once again, this time to escape the new communist regime.

The preserved premises of their apartment was then used as offices, as well as a headquarters space and a meeting room. The current owner of the apartment is the city of Pilsen, and demanding restoration efforts were completed in 2014. Both rooms are now furnished with the exact replicas of the original free-standing furniture. A team of architects led by the Professor of Architecture, Václav Girsa, is responsible for the design of the reconstructed apartment. 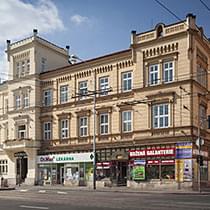 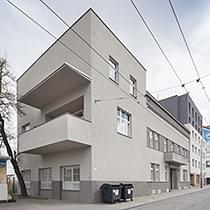 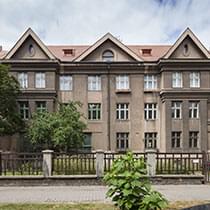 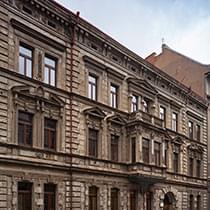 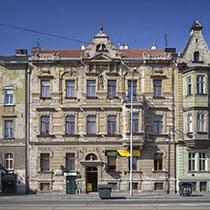 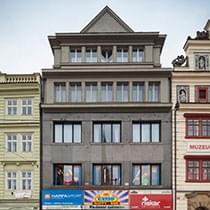